Review apps are a powerful collaboration tool to discuss about a new features between members of your organization. We implemented this feature as part of our SCM integration.

What Are Review Apps?

Let say that you have worked some hours on an awesome new feature. It’s time to show the world your work and to open a new Pull/Merge Request (PR) on the SCM tool (even if it’s not fully done). With review apps enabled on Scalingo, we will create a new application (called a review app) with the code of the new feature. You can now share the result of your work, to get it validated, with all people involved, even if they are not in the tech field.

Maybe they will tell you to change something like adding tests or to change a button color. You need to push your following modifications on the branch involved in the PR to update the review app.

Once all of our teammates are satisfied and the PR is closed, we will automatically delete the review app. You can disable this behavior or add a delay to fit your needs. This latter setting means that you can still review PR after your dev team has closed the PR.

If you don’t want to create a new review app for each PR you can also choose among open PRs of your app to manually deploy a review app. 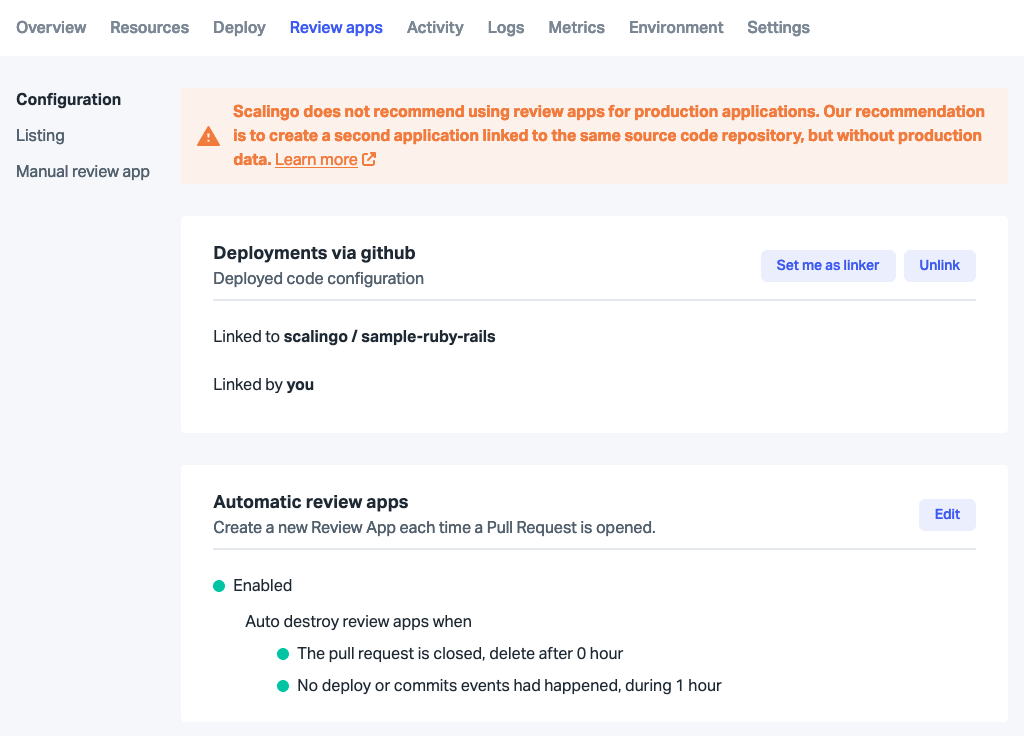 It is also possible to manually create a review app using the Scalingo CLI:

In this example, 42 is the pull request or merge request ID.

If one manually deletes a review app, it will not be automatically created again after a deployment. You need to manually deploy a new one.

By default child applications will get a copy collaborators and environment variables from the parent application.

This default behavior can be customized, see below.

It is however important to understand that the customization can allow to connect directly the Review App to the parent application database and addons, so Review Apps must be enabled only when trusted sources are allowed to create merge requests in the source code repositories. As a consequence, Scalingo prevents Review Apps from being created from forks of the original repository.

Datatabases content and other addons content won’t be copied from the parent application to its child applications.

Having a strict copy of the parent application is sometimes not desirable. You might not want to copy production credentials, or it is sometimes required to start a custom task after the initialization of the app. That’s where the Scalingo JSON manifest becomes useful.

If there are valid reasons and cases where configuring the scalingo.json is the adequate solution, it is important to understand that it is sometimes not the apporiate one. As Review Apps can connect to their parent database, and addons, this means personal, or health-related information can be exposed. As a consequence, Scalingo recommends not to enable Review Apps for production applications; the preferred approach is to create a second application linking to the same repository. This second, separate application can then have Review Apps, while protecting production data.

As a quick example, here is a sample scalingo.json that customize the environment variable CANONICAL_HOST_URL for a child app:

Here, the value of the environment variable CANONICAL_HOST_URL will contain the URL to reach the newly deployed app. The scalingo.json configuration always takes precedence over parent app configuration.

You may want to protect access to your review apps so that authentication is mandatory before reaching the review app. A solution is to update the scalingo.json file to look like:

You can also generate a different password for each review app by using the secret generator in the scalingo.json file:

The environment variable PASSWORD should be used by your application to configure Basic Auth on your app.

Run a Task After the First Deployment of a Review App

When a review app is created, you might want to execute a custom action like seeding its database. This can be done using the first-deploy script in the scalingo.json manifest. If such a property is defined, the given command will be executed as a postdeploy hook after the first deployment.

This script replaces the postdeploy hook for the first deployment of a review app. If a postdeploy is defined in your scalingo.json or Procfile, it won’t be executed.

Run a Task After Each Deployment of a Review App

To make sure only review apps are impacted, the common practice is to define a custom environment variable in the scalingo.json manifest:

Then use the environment variable in your postdeploy task to check if it is executed in the scope of a review app or not.

Is It Possible to Create Review Apps If My Code Is Hosted at a Different Place?

We implement review apps for code hosted on GitHub or GitLab. However you can set it up for your specific case thanks to the Scalingo API: