These operations require our command-line tool to be installed.
Instructions to install it are detailed in the CLI documentation and installer page.

Redis is the official addon provided by Scalingo, details on the available plans can be found here. This addon gives your app instant access to a Redis database running in its own Docker container.

Adding Redis to Your app

You can add the Redis addon through the dashboard or through the command line interface. The capacity of your database is elastic, you will be able to upgrade it later. 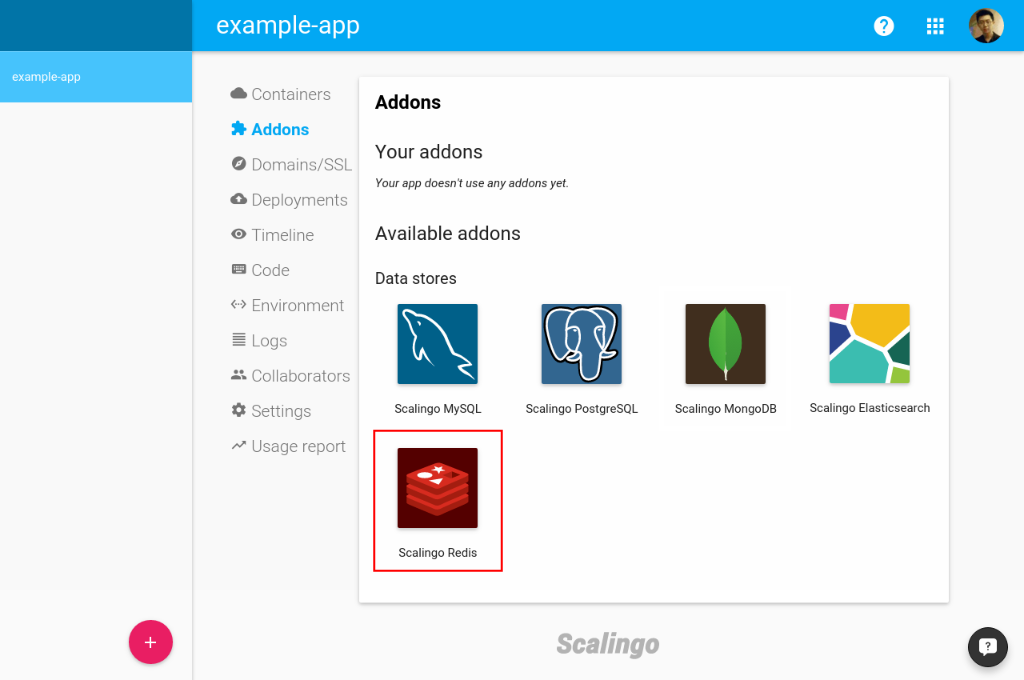 Through the Command-Line Interface

This command will provision the application my-app with a redis-starter-1024 Redis database plan.

To find out what other plans are available:

If using a Business plan for your Redis addon, we setup a Redis cluster. This cluster has the following configuration:

Getting Your Connection URI

In most cases, you can pass the variable directly to the client library you are using in your code. But sometimes the library requires a specific URI format, you’ll need to add a little bit of code to suit the library.

You can get environment variables from the dashboard or the command line interface. 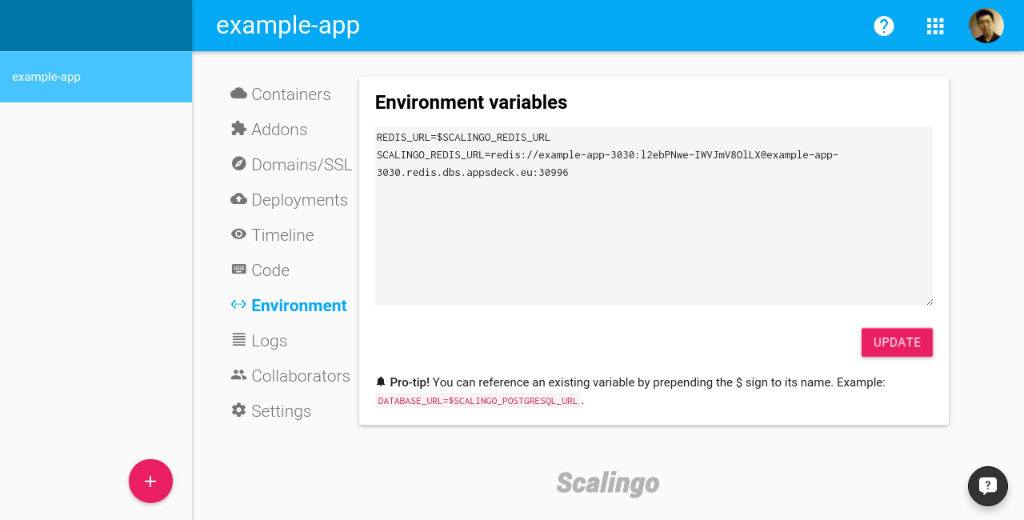 From the Command-Line Interface

If you want to force connections to your database to use TLS, head to the database dashboard and click on the toggle button:

Note that you must have configured your application to use TLS when connecting to the database.

Each Redis instance can use 5 databases (numbered from 0, the default DB, to 4).

It means that if a connection has not been used during 150 seconds, it will be automatically closed by Redis. This is done to avoid accumulating staled connections. You must ensure that your application code handles gracefully potential timeouts in Redis connections.

Redis does not write all the operations requested by users on disk instantly, the write operations are done asynchronously by following different rules. There are two persistence modes: snapshot and strong persistence. They both represent a different trade-off in terms of performance and reliability. As such, you must take great care in your Redis persistence mode settings.

The first, and default mode, is the snapshot mode (also called RDB). It provides a compromise between performance and persistence. Data are saved to disk periodically, according to a defined number of write operations, asynchronously:

It means that in the scope of an incident, recent data are lost.

The second mode provides Redis with the highest level of persistence (also called AOF). Any command impacting the dataset will be saved synchronously in a file. In case of incident, Redis replays the logged operations to reconstruct the database dataset.

The typical use case is when using Redis as a key-value store. We can imagine the comments on a blog post page being stored in a Redis list. Losing comments because of an unexpected Redis restart is not acceptable and activating AOF mode sounds like a good idea.

The last available configuration is related to how long data are stored in Redis. When cache mode is activated and the memory is full, Redis will automatically drop the less recently used data to free up memory for most recent data. Be cautious as any data can be deleted.

Don’t use your Redis instance to store important information in cache mode.

The typical use case is Scalingo’s homepage and blog. It uses Redis as a cache for HTML fragments. In such case, we can afford using the oldest data stored in Redis, and re-compute them if needed.

You can upgrade or downgrade your database plan whenever you need it. This operation happens instantly thanks to Docker containers and no manual input is required. When you change the plan, your database will be stopped then restarted on a new host with new parameters of the chosen plan. During the operation the connection is dropped between your app and the database. Finally, after the operation is successful, the related app will be restarted.

From the Command-Line Interface

To upgrade or downgrade your addon the sub-command is the same: addons-upgrade.

To find out the addon ID:

The Redis dashboard is the central place for administrative tasks such as: 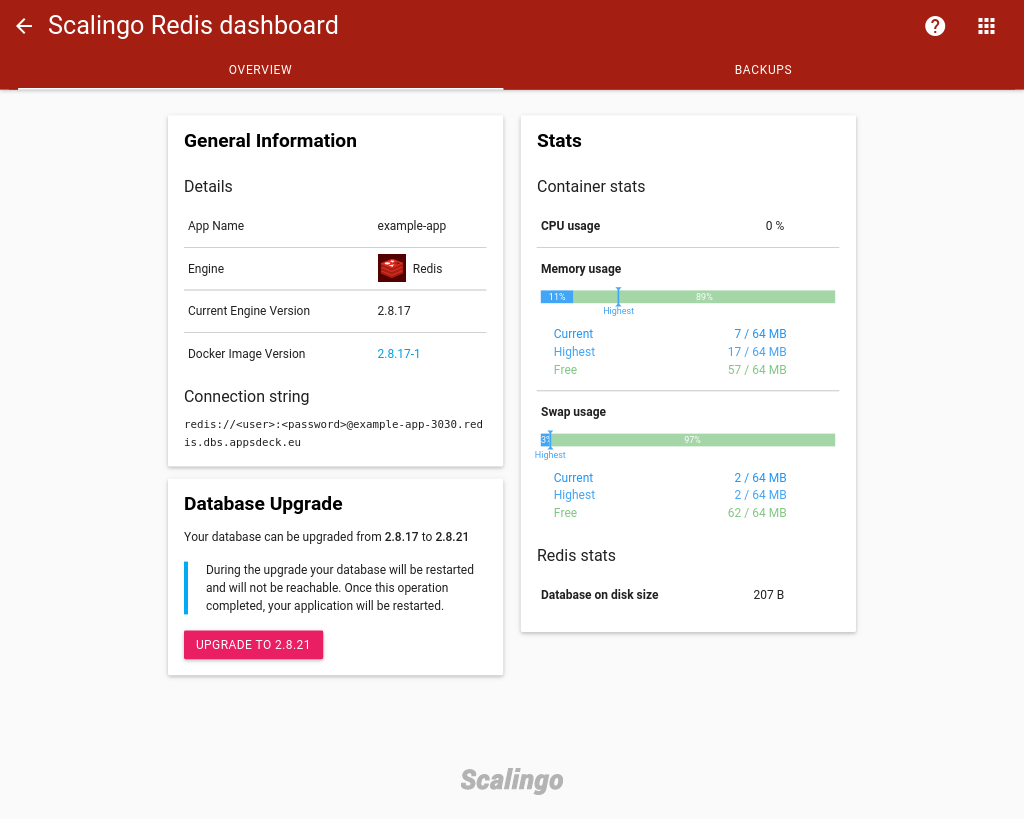 When the database vendor releases a new version of your database engine, we will try to provide it as soon as possible. You will have the choice to upgrade your database with one click through your database dashboard.

This operation is similar to changing your database plan; your database will be stopped and restarted with then new database version. Thanks to Docker containers this happens seamlessly and quickly without manual action. When this operation finishes, your application will be restarted.

Beware that no downgrade is possible once your database has been upgraded.

If your database is in a paid plan (i.e. it’s not “free plan”), we’ll automatically make periodic backups of your database on a daily basis, at around 1:00 AM Central European Time (CET or UTC+0100). The time of your daily backup is configurable via the web dashboard of your database or using the CLI. The scheduled date is not strongly enforce: it might get delayed depending on the load on our infrastructure.

You can also manually trigger a backup for your database at any time you want. The number of manual backups that you can retain is limited by your plan:

In case a database is removed from an application, the retention policy remains untouched: backups are not instantly deleted.

If your database has multiple nodes, the dump is done on the secondary node.

Automated backups are listed in the database specific dashboard. 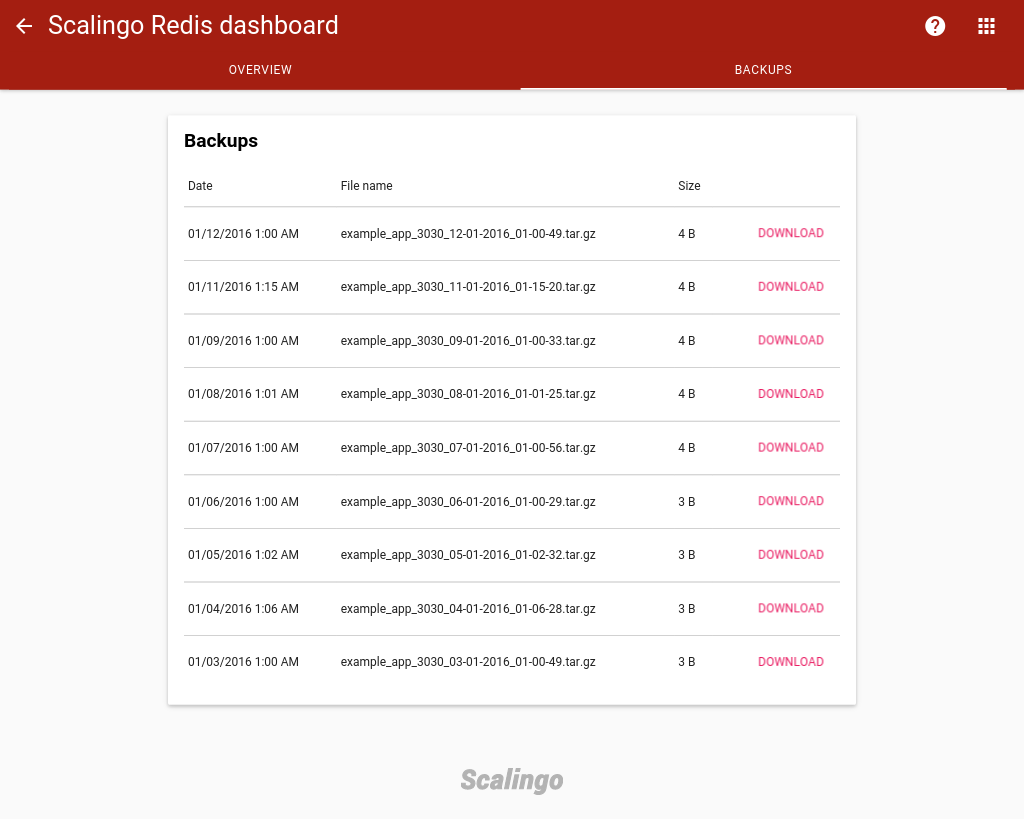 All databases created after the 6th of January 2019 have encryption at rest enabled. In other words, all your data is encrypted before being stored on disk.

For databases created before this date, encryption at rest is activable on-demand through the support. Activating it is achieved with a short downtime for your database, from seconds to minutes depending on the amount of data.
Last update: 31 May 2022 Suggest edits